I am writing to bid farewell to you as I am completing my duty as Chinese Ambassador to the United States and will be returning to China soon. During my tenure here, I have worked closely with my American friends and colleagues, amidst the complexities and difficulties in China-U.S. relations, to implement the common understandings of our Presidents, promote dialogue and cooperation between the two countries, and ensure the stability and improvement of our bilateral relations. While I would hate to say goodbye, I wish to pay sincere gratitude to you and all my friends in the United States for your strong support and assistance.

When I came to the United States, I was determined to build bridges of communication and cooperation with all sectors of the United States, safeguard the foundation of China-U.S. relations, and uphold the shared interests of the two peoples.

This mission has guided me through the past 500-plus days, as I worked to build ties and engage extensively with the American government, Congress, business community, think tanks, the media, and people at the sub-national level. I have done my best to be both a listener and a problem-solver. I will never forget our enlightening conversation, and your enthusiasm in building hope for the world which is badly needed in our times.

I have visited 22 American states, I went to enterprises, factories, ports, farms, schools and sports fields, and connected with ordinary Americans, I am grateful for the opportunity to contribute to people-to-people friendship and advance win-win and practical cooperation between our two countries, and I have been deeply impressed by so many hard-working, friendly and talented American people that I met

42 years ago, you and Mr. Deng Xiaoping made the historic decision of establishing diplomatic relations between China and the United States. I will leave the United States more convinced that the door of China-U.S. relations, which is already open, cannot be closed, as I said when I arrived in this country. This is the trend of the world, the call of the times, and the will of the people. I am also more convinced that the people are the maker of history. A healthy and stable China-U.S. relationship bears on the future of the 1.7 billion Chinese and American people and our entire planet. China-U.S. relations should not be a zero-sum game where one side out-competes the other or thrives at the expense of the other. The successes of China and the United States are opportunities, not challenges, for each other. The world is big enough for the two countries to develop themselves and prosper together. Our two sides should follow the strategic guidance of our Presidents, and find the right way to get along for the wellbeing of the two peoples and for world peace and prosperity. This will not be a walk in the park, but requires persistent efforts of everyone. However, history will prove that our work today is essential and worthwhile.

My posting in the United States will be a precious memory that provides unfailing strength for me as a diplomat. No matter when and where, I will care about and support the growth of China-U.S. relations as I always have, and I look forward to benefiting from your continued support.

I wish you a joyous and successful new year! 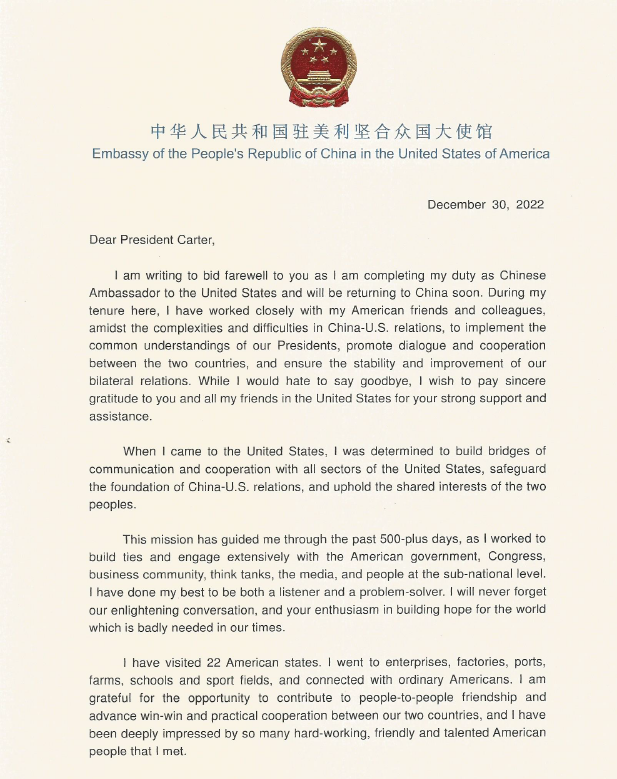 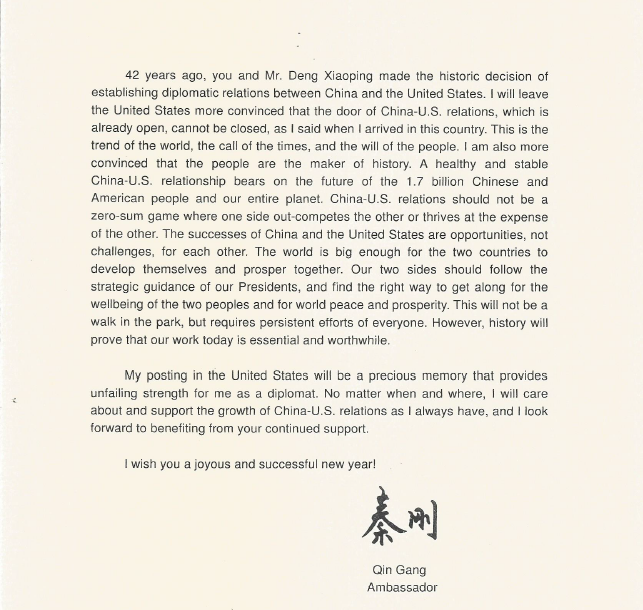